Tour Babirusa, Animals From European Fairy Tales That Turn Out There!

Tour Babirusa, Animals From European Fairy Tales That Turn Out There! - There is one animal that was previously thought to be a myth for Europeans or just an animal that came from European fairy tales. but around the year one thousand eight hundred Albert Wallace came to Indonesia and got the bones from Babirusa in Tangkoko, and even then it became a scene in Europe because the animal that was thought to only exist in the fairy tale turned out to be real and exists in Indonesia, namely on the island of Sulawesi. 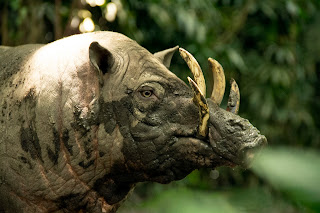 Babirusa is an endemic animal of Wallace. The place of residence of the Babirusa is in the wild, at first glance this pig is indeed similar to the caste pig, the difference is that the babirusa has horns on the head while the caste pig does not. In the past, there were 4 types of babirusa, but one type of babirusa is extinct and the extinct one is the Bolabatu babirusa originating from South Sulawesi, and the remaining 3 species in the world are the Sulawesi babirusa (Babyrousa celebensis), Togean babirusa (Babyrousa togeanensis), Pulau Buru (Babyrousa babyrussa) .

Babirusa is included as an animal that is protected by law, meaning that its specimens are prohibited to be traded either in live or dead form and or parts and derivative products. These wild animals are also included in the IUCN Red List as endangered species with a vulnerable category.

One of the very good babirussa viewing spots is in the province of Gorontalo. for the part of North Sulawesi itself, especially in Manado, it is very rarely found because one of the reasons is that it is often hunted. in Gorontalo itself is a babirussa observation place that is most visited by foreign tourists who like wild life, namely in the forest of the Nantu Wildlife Reserve.

From Gorontalo City to the Wildlife Sanctuary, the journey is approximately four to five hours by car, which is located in Boalemo Regency, Wonosari District. then after that cross to the forest of the Nantu Wildlife Sanctuary. For homestays too, there are those in the Saritani village, so for tourists who want to see the babirusa and want to spend the night there, the Saritani village is already available homestay.

Usually, wildlife tourists don't just come to see the babirusa, because Sulawesi has many types of endemic animals. So in conclusion, the Babirusa is an animal that is protected by law, so we as humans naturally have to protect and preserve it.

So the first discussion this time, hopefully it can be useful for you in gaining knowledge.